Just added to your cart

An Obstacle to Cure

Whether you are a Doctor or Practitioner treating others, or someone looking to heal yourself, how often does a correctly diagnosed condition given the correct treatment of choice either not respond or only partially improve?

Whatever modality you use, treatment cannot be successful if whatever has been the underlying cause (or a factor within a disease picture) is maintained too. Samuel Hahnemann described it perfectly in his Organon of Medicine as “the obstacle to cure”...

“…if the physician, in each case, knows the obstacles to cure and how to remove them, so that recovery is permanent, then he knows how to treat thoroughly and efficaciously, and is a true physician.” 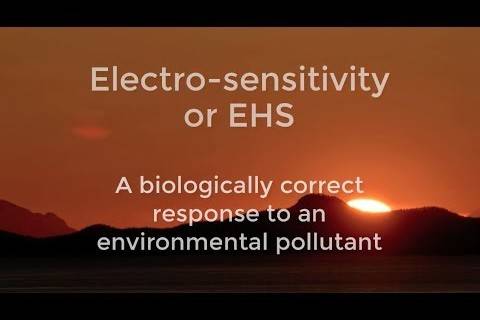 A Variety of Obstacles

There are many potential obstacles to cure including but not limited to stress, poor nutrition, toxicity from drinking & smoking etc, poor sleep, bad exercise regime, substance abuse, etc. These are all fairly obvious and good clinicians will advise on these alongside prescribing whatever treatment they think is best. Other obstacles to cure may be more difficult to identify, whether through being rare and/or obscure, or because they are difficult to identify in terms of causality.

The EMF Obstacle to Cure 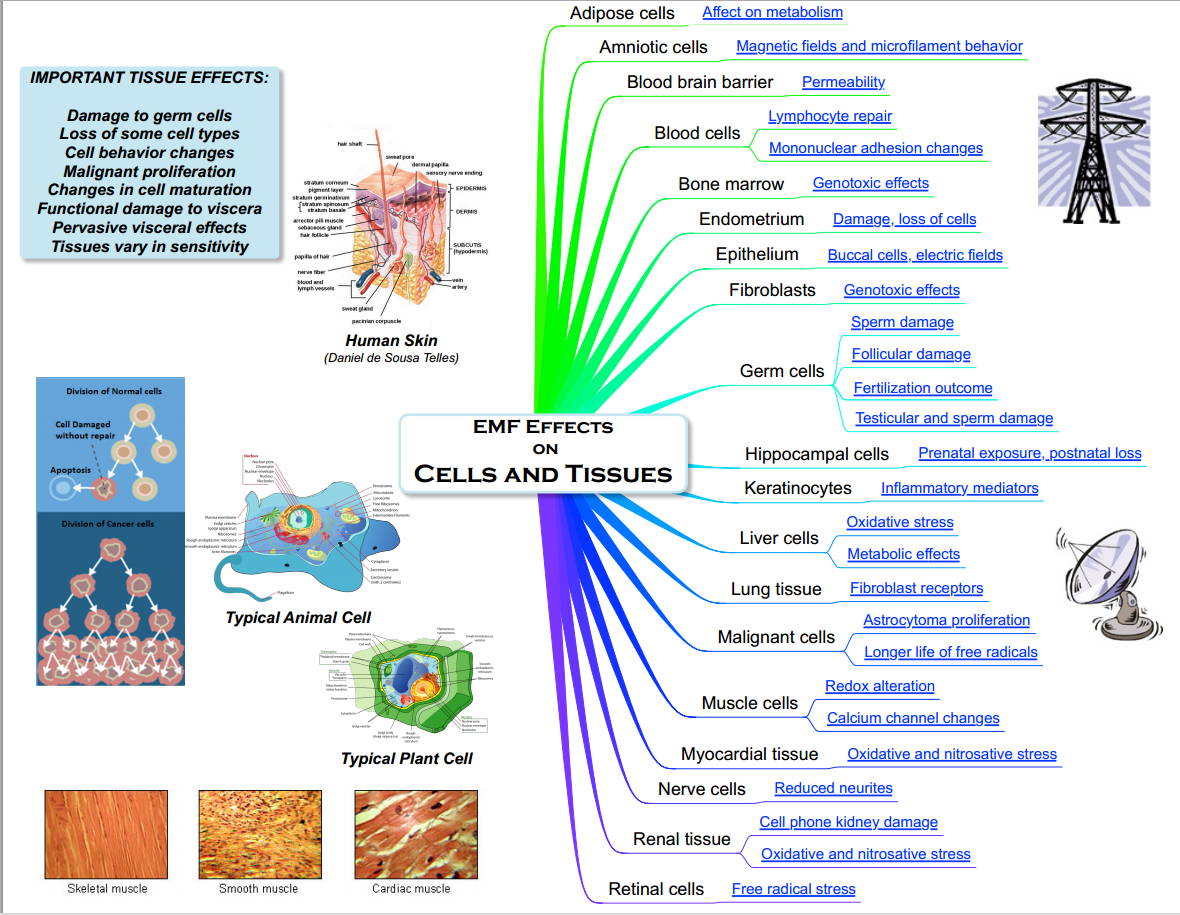 The diagram indicates a range of tissues and cells that can be adversely effected by EMFs, and the range of symptoms this can cause.  Despite knowing this, EMFs are a much overlooked obstacle to cure. I suspect this is because we can't see or smell them or otherwise detect them, unless we have equipment or are ultra-sensitive.

Maybe because clinicians function well (they think!) within them, they are frequently not considered when assessing health in others? Some research suggests they are more frequently involved than we realise when considering non-specific symptoms that many people experience at a mild to moderate level on a frequent or daily basis. This figure is estimated at 40+% of the population.

EMFs are rarely considered as a factor in more serious illnesses too, yet research indicates that they can contribute to many such conditions, including auto-immune diseases, cancer, and others.

This medical oversight has maybe partly occurred because Telecoms Industry-sponsored research has been given priority when determining official safety limits for exposure. Consequently, safety regulations are woefully inadequate and with the huge rise in EMFs over a decade, (1019 times more according to Professor Olle Johansson in the docufilm Generation Zapped) everybody is exposed to multiple EMF frequencies from multiple sources on an almost continual basis.  There has never been any safety testing for this level of exposure on a short term basis, let alone 24/7/365 exposure, as nearly all of us now experience.

Even when official safety limits are considered it is still perfectly possible to be over-exposed on an every day basis.  For example, if you look at the recommendations for mobile phone use in the small print, people are advised to maintain a distance of 5mm between their head and the phone. Yet how often do we see phone users with the phone clamped hard against their ear?  How often do you do it?!!  The following graph indicates official test results in France between 2015-17, published in 2017, when investigating the EMFs directly next to the head. Even in comparison with inadequate SAR safety levels, people's heads are significantly over-exposed.  The “safe” upper limits under the SAR scale are set 1.6W/Kg (USA) and 2W/Kg (EU) even though biological effects have been demonstrated to occur at much lower levels. 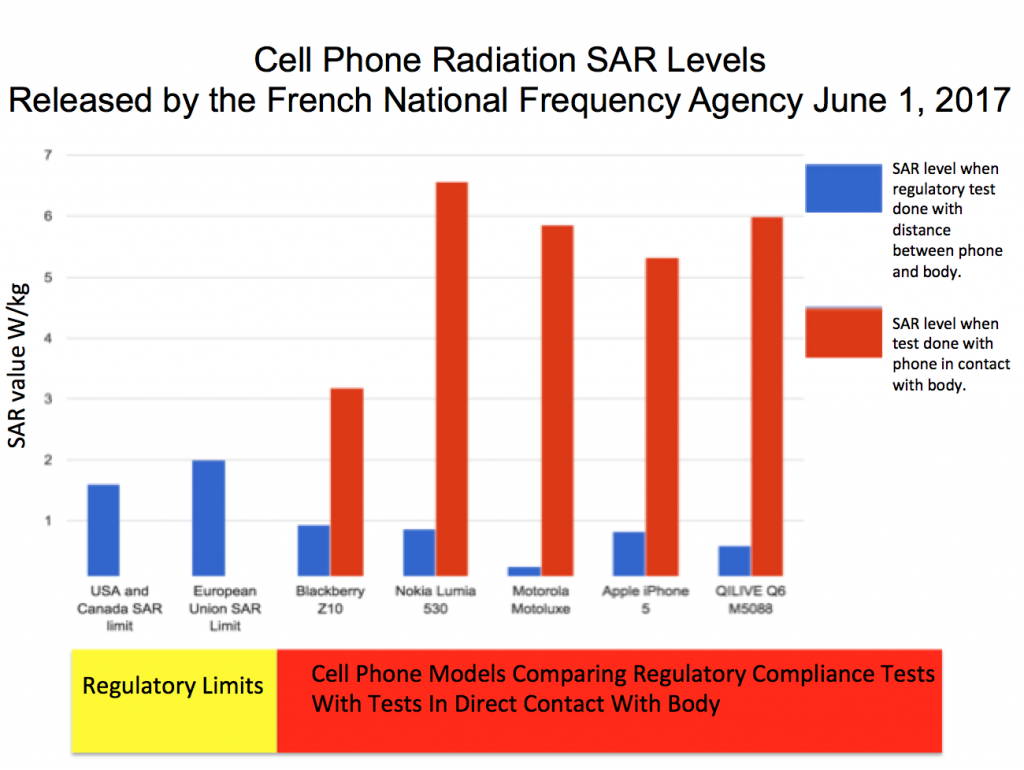 When you consider how much more radiation is absorbed by children – nearly 10 x as much according to research – it is no wonder that health issues are increasing, with greater severity, and at ever younger ages.... 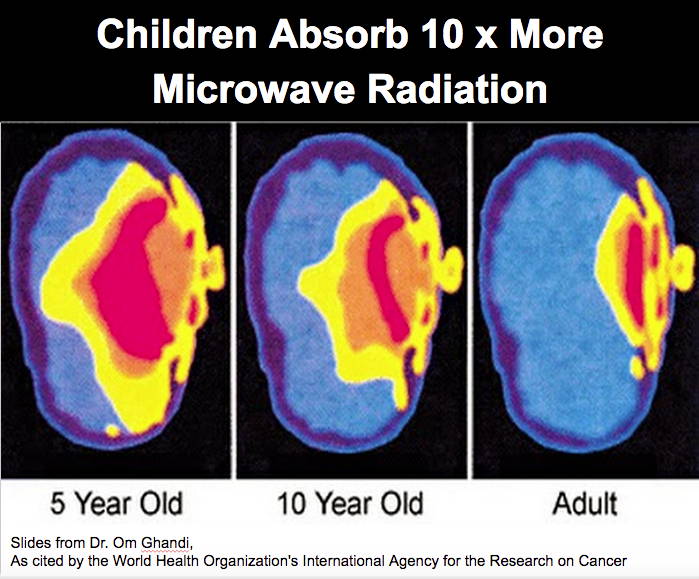 When the Freiburger Appeal was launched in 2002, over 1000 Drs and medical practitioners signed it, in which is stated....

“Since the living environment and lifestyles of our patients are familiar to us, we can see especially after carefully-directed inquiry a clear temporal and spatial correlation between the appearance of disease and exposure to pulsed high-frequency microwave radiation (HFMR), such as:

We can no longer believe this to be purely coincidence, for:

On the basis of our daily experiences, we hold the current mobile communications technology (introduced in 1992 and since then globally extensive) and cordless digital telephones (DECT standard) to be among the fundamental triggers for this fatal development. One can no longer evade these pulsed microwaves. They heighten the risk of already-present chemical/physical influences, stress the body’s immune system, and can bring the body’s still-functioning regulatory mechanisms to a halt. Pregnant women, children, adolescents, elderly and sick people are especially at risk.

Our therapeutic efforts to restore health are becoming increasingly less effective: the unimpeded and continuous penetration of radiation into living and working areas particularly bedrooms, an essential place for relaxation, regeneration and healing causes uninterrupted stress and prevents the patient’s thorough recovery.”

The bold has been added to highlight the conclusion which indicates that EMFs not only increase and aggravate existing pathology, but are an increasing obstacle to cure. The level of EMF pollution is now many times higher than it was when this realisation drove these clinicians to start the Appeal.  Since 2002, WiFi, Bluetooth, 4G and other wireless technology has become even more widespread on top of an ever increasing volume of mobile phone use.  5G threatens to step up this threat to a whole new level too.

How EMFs Cause Harm

Since the Freiburger Appeal, the mechanisms by which EMFs interfere with cells and our health has also been researched and established. In his document to the EU Commission regarding the dangers of 5G, Professor Martin Pall lists 8 primary ways that he and other researchers have identified as to how EMFs adversely affect health. According to research, they...

Professor Martin Pall from Washington State University has also determined the pathway (below) by which EMFs can cause this damage. 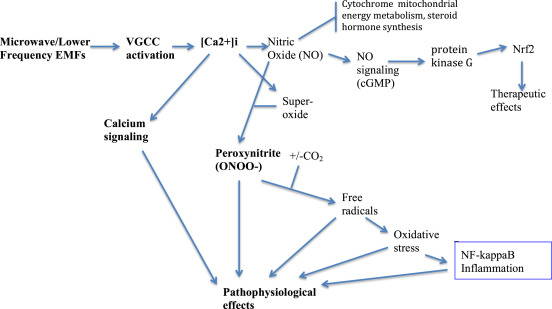 It all stems from disruption of the Voltage-Gated Calcium Channels (VGCCs) in our cells that sets off a cascade of reactions and events that results in chronic inflammation. 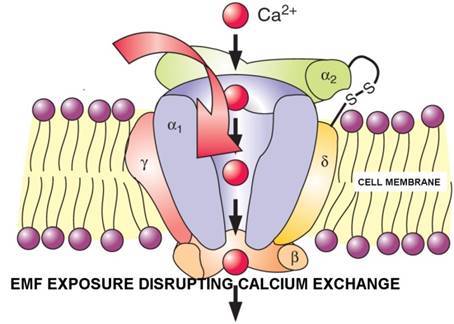 Chronic inflammation is the basis for many different diseases that are more commonly named according to where in the body they occur rather than what actually causes them. In many cases no cause is identified and the disease is termed "iodopathic" (which means of unknown cause) without a thought towards EMFs.  To be fair, because many of the symptoms resulting from EMFs are non-specific they can be caused by one or multiple causes, yet when symptoms are the result of non-specific reactions, no thought is given to EMFs as a possible cause!  Inflammation is also the background of auto-immune diseases, cancer and other serious illnesses.

The prevalence of EMFs has reached such a level that whatever treatment is being used, the inevitable increased levels of inflammation from EMFs will compromise clinical results unless the insidious EMF influence is addressed.  Clinical results can only improve by mitigating the adverse effects of this ubiquitous obstacle to cure. Given that 3-8% of the population suffer from severe Electromagnetic HyperSensitivity (EHS) there will be current patients and many potential patients who would appreciate being able to visit their health care professional in an environment that mitigates the adverse effects for all who visit and work there. Sweden is the only country to date that has EMF-free Medical clinics specifically for EHS patients. There are different figures in different countries for EHS prevalence according to what degree EHS is recognised as a medical condition.

Comosystems scientists have researched and developed Compensating Magnetic Oscillator (CMO) technology that uses quantum resonance (Quantum Physics is not just theoretical..!!) to reinforce the bond between the proteins that hold Calcium ions (Ca 2+) and the Ca 2+ ions themselves. This resets the threshold for Calcium release to where it should be, thus preventing the doubling in intracellular Ca 2+ that the EMFs cause.  This stops the inflammatory pathway from even starting. The following research results were obtained and published 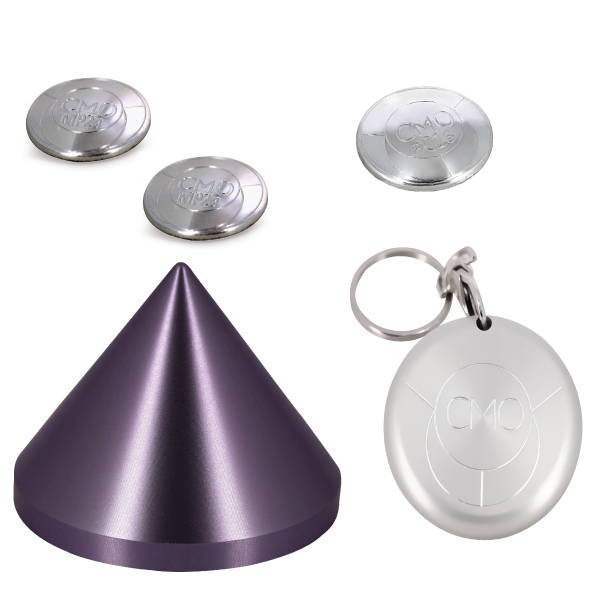 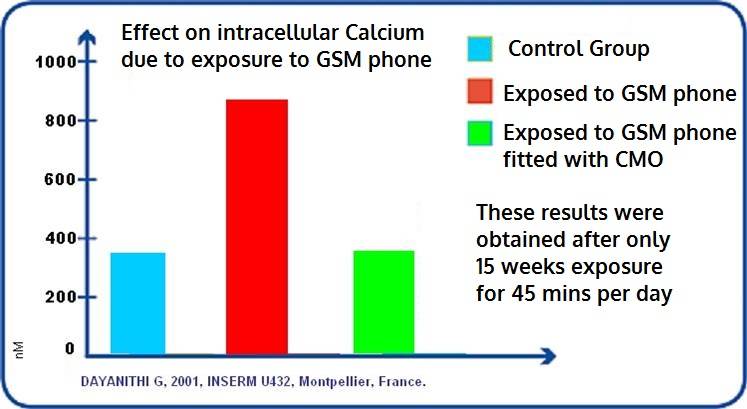 The following test results on over 500 people demonstrate how many every day symptoms that thousands of people experience can be helped just by mitigating EMFs with CMO. The fact that CMO was able to mitigate them demonstrates that EMFs are causative or at least a factor. In this research carried out at Reading University by Professor Derek CLEMENTS-CROOME, 30% of symptoms disappeared just by using CMO. 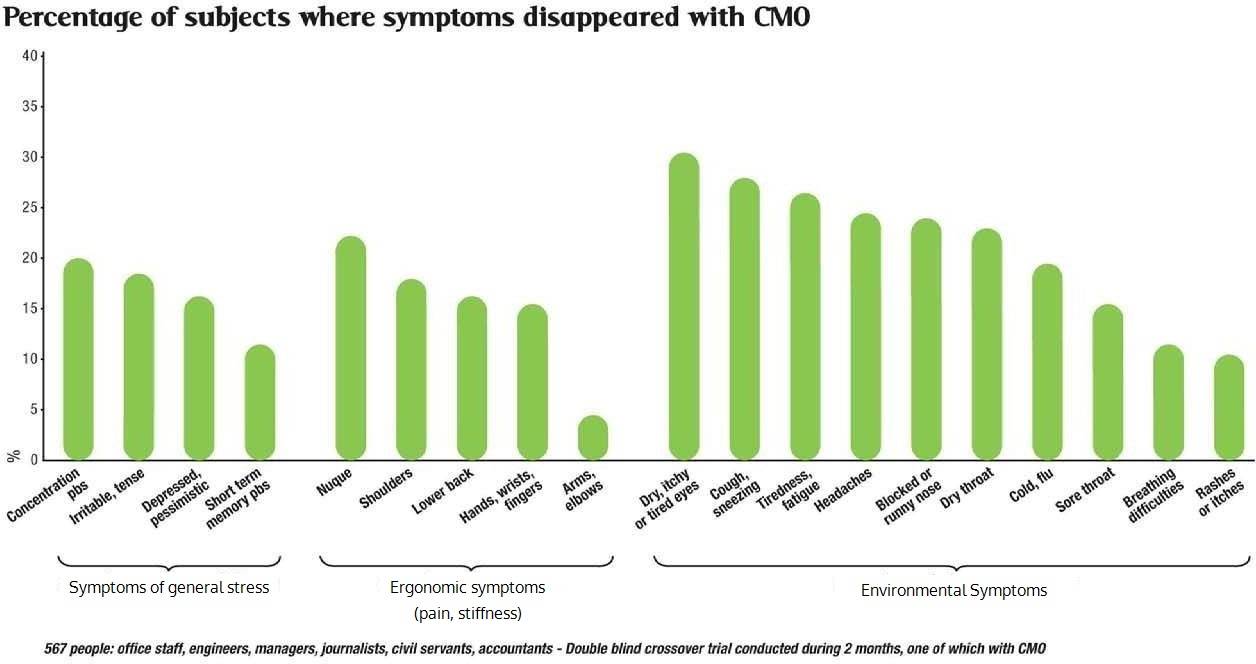 The beneficial response of a wide range of stress markers to CMO also demonstrates how many patients are likely to have aggravated symptoms from EMFs, and also how many would benefit from adopting CMO in their homes, at work, and on their technology. 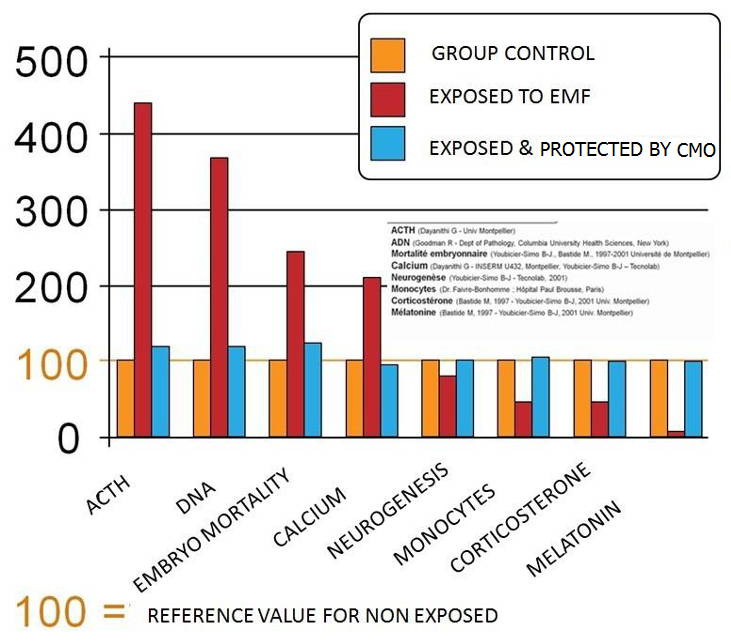 It is pretty much a certainty that a significant proportion, if not all, chronically ill patients will get benefit from CMO to mitigate their EMF-induced inflammation. Removing such a major obstacle to cure can only enhance whatever treatment regime is already being used. It therefore makes sense to introduce CMO as a fundamental part of any existing clinical treatment regime to support and enhance your existing modalities.
We can supply you with the full range of CMO products at wholesale prices for you to sell directly to your patients, and/or you can join the general affiliate scheme where you don't need to handle and tie up money in stock.

Doing both gives you the best of both worlds. Contact us now for further details